That certainly didn't take long. On Friday, with two more bombs turning up (this time targeting Sen. Cory Booker, D-NJ, and former DNI James Clapper), federal authorities arrested the man they say is responsible. He's 56-year-old Floridian Cesar Sayoc, and the paper trail that journalists have turned up says he is both an entrepreneur and a fellow with a long criminal record.

Not long after Sayoc was arrested, pictures of his van began circulating on the Internet: 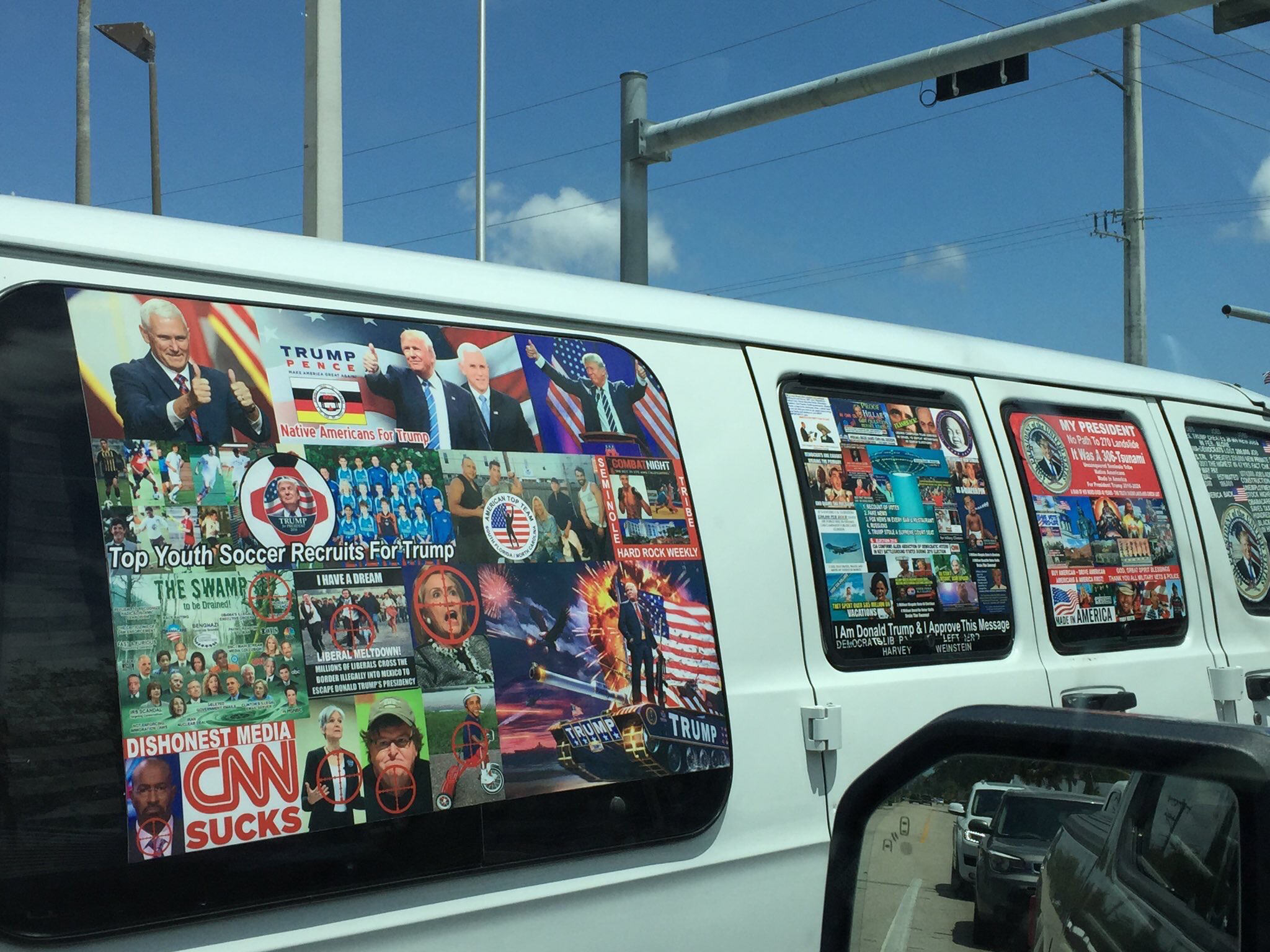 That's one of the finest collections of pro-Trump memes extant, including several that feature gun sights superimposed on prominent left-leaning figures, like Hillary Clinton and Michael Moore. Assuming that the feds have fingered the right man, then it would appear that the #MAGABomber tag was right on target (no pun intended). And the feds surely do have the right guy; they tracked him down with a combination of DNA, fingerprints, and cell phone geolocation information. Meanwhile, since his vehicle just so happens to be a Dodge Caravan, folks are already making the observation that Donald Trump is obsessing about the wrong caravan.

And speaking of Donald Trump, his response to the latest developments was...less than presidential, let's say. Any of the presidents 2-44 would almost certainly reach out to any of their predecessors if those predecessors' lives had been threatened. When asked if he planned to contact Bill Clinton or Barack Obama, Trump said, "I think we'll probably pass." Even less admirable was his response when asked if he planned to tone down his rhetoric, given the clear connection between his words and Sayoc's actions. "Tone down, no," he answered "Could tone up. I think I've been toned down, if you want to know the truth." Given how strident he's been in his rallies in the last month or so, in particular using verbiage that brings to mind a certain German leader of the 1930s, it's a frightening thought that maybe he's been holding back.

Of course, the big question is: Will this whole fiasco influence the midterm elections, given that they are just 9 days away? McClatchy took a crack at that question, talking to strategists on both sides of the aisle, and the general consensus was "no." There's probably a lot of truth to that. In the end, what we've learned in the last week is:

In other words, the situation has taught us a bunch of things we already knew. Anyone likely to be motivated by the response of Trump and his partisans, whether in one direction or the other, already had a thousand other things serving to provide the same motivation.

With that said, the bomber is Floridian, several of the targets are Floridians, and Florida has a two very close elections right now (see below), each of them involving a Republican candidate who has hugged Trump very close. So if there is one place where the bomber might move the needle, it's probably the Sunshine State. (Z)

Trump Is Worried about a Florida Wipeout

Politico is reporting that Donald Trump is very worried about Florida. The Sunshine State has critical gubernatorial and Senate races, as well as a handful of competitive House races where the Democrats could pick up seats.

The situation is so dire that Trump is expected to visit the state twice, as follow-ups to the visits of Mike Pence and Kellyanne Conway on Thursday. Other cabinet members may show up as well. Campaign officials for Gov. Rick Scott (R-FL) and Ron DeSantis (R) say that their candidates are ahead, but their calls for help belie their public confidence. Also, DeSantis fired his campaign manager last month. Candidates who expect to win generally do not fire their campaign managers in the home stretch.

Whether Trump's presence in Florida is a net win for the GOP is open to question. In case anyone hasn't noticed, Florida is not Wyoming. While his rallies may gin up the faithful, they are likely to gin up the unfaithful as well. Democrats who hate Trump may be reminded of why they hate him and may be more inclined to vote as a result of his rallies. (V)

Trump to Hold Rallies in Eight States before Election Day

Florida isn't the only state Donald Trump is planning to visit in the next 2 weeks. Also on his itinerary are Georgia, Indiana, Missouri, Montana, Ohio, Tennessee, and West Virginia. All but Ohio are states with a critical Senate race (while there is a Senate race there, it's all over but the crying). Ohio (and also Georgia) have bitterly contested races for governor. All of these are states Trump won in 2016, so his visit is likely to be well received, at least by some residents. While the chances of these visits allowing the Republicans to hold the House are low, they could help the GOP expand its Senate margin. Trump will feed red meat to his base at all his stops. The big topics are illegal immigration and the nomination and confirmation of Brett Kavanaugh to the Supreme Court.

The White House staff is optimistic about the upcoming rallies. Bill Stepien, the White House poliical director said: "No one Republican, no surrogate, no person can better move the political needle than President Trump." That is certainly true, but it remains to be seen in which direction he moves it. (V)

Newt Gingrich Says What Everyone Was Thinking

When Donald Trump was considering justices who might succeed Anthony Kennedy, he had a long list to pick from, many of them with solid records and no obvious skeletons in their closets. Instead, he went with the one guy, in Brett Kavanaugh, that Senate Majority Leader Mitch McConnell (R-KY) counseled against, warning (presciently, as it turns out) that Kavanaugh would be very difficult to get approved. It has long been assumed that Trump made the choice he did because Kavanaugh had a fairly lengthy history of supporting positions favorable to a President who might find himself personally facing the Supreme Court.

This week, former speaker and current Trump cheerleader/insider Newt Gingrich confirmed that such suspicions were right on the mark. If and when the Democrats take the House of Representatives, one of the first items on the agenda will be requesting the President's tax returns, a privilege that is granted (statutorily) to the chair of the House Ways and Means Committee (the current ranking member, and would-be chair, is Democrat Richard Neal). Gingrich was asked about what would happen next in this scenario, and he said Trump would refuse, "Then [the Democrats will] be trapped into appealing to the Supreme Court, and we'll see whether or not the Kavanaugh fight was worth it."

So, there it is, straight from the horse's mouth. Or, at least, the Newt's mouth. Of course, if SCOTUS appears to have turned into a rubber stamp for Trump, validating his questionable behavior 5-4, it will ultimately serve to drive Democrats into an even more intense frenzy, while further undermining the Court's moral authority. Chief Justice doesn't want this and probably doesn't give a hoot about Trump's tax returns, so it is unlikely that Roberts would want a 5-4 decision for Trump here given a clear law saying the Ways and Means chairman has a legal right to see any tax return. It's also worth pointing out that Supreme Court justices have a funny way of coming up with surprise conclusions on occasion, so Trump probably shouldn't count his hidden tax returns quite yet. (Z)

There Are Obstacles to Voting in Many States

Many states are making it hard to vote for various reasons. McClatchy has a rundown of the issues and dirty tricks. Here is a summary.

In addition, many states have voter-ID laws of various kinds with various conditions, such as the North Dakota law requiring the ID card to have a street address, something that Native Americans living on reservations don't have. (V)

Not only is voter suppression becoming an almost daily item around here, but specifically stories about voter suppression in Georgia are popping up almost every day. The latest, according to reporting from the New York Times, is that 4,700 requests for mail-in ballots have gone missing in DeKalb County. DeKalb is one of Georgia's largest and most liberal counties. It is also 54.3% black.

As noted above, Georgia secretary of state Brian Kemp has neatly arranged it so that he is overseeing an election in which he is a candidate for governor. That means, at best, that the buck stops with him in terms of the missing ballots, and it is his responsibility to rectify the situation. At worst, the ballots were "lost" on his say-so. Either way, it is not wise to expect him to work vigorously to make sure those 4,700 folks are taken care of. Meanwhile, four of the last five polls of the race have given Kemp a two-point lead (the fifth had it a tie). So, if these tactics are successful, they could very well swing the election (or, at very least, make sure it's in the bag). (Z)

In the past 8 years, a collection of just 11 hedge-fund managers, entrepreneurs, media magnates, and a casino mogul have donated $1 billion to super PACs. Of these, five are Republicans, five are Democrats, and one (Michael Bloomberg) has been a Republican, and independent, and a Democrat. When the Supreme Court issued the Citizens United decision, it said that the possibility of rich donors swinging an election was remote. Turns out it's not.

In two of the three states on this list where Donald Trump has held a rally, polls show the Democrat gaining ground after his visit. The exception is Michigan, which has tightened up since he came to town. (Z)