•  EPA: "Yes, Sir!"; Pentagon: "No, Thanks."
•  Iran Sanctions Are Underwhelming
•  Maybe God Is a Republican
•  And So it Begins
•  This Week's Senate News
•  Democratic Presidential Candidate of the Week: Hillary Clinton
•  Today's Senate Polls

It would appear that not everyone in the Trump administration is behaving like a good little soldier (literally). As he sends 15,000 or so troops to the border, to "protect" Americans against a caravan of 3,500 people, Donald Trump wanted those soldiers to take on a law enforcement role. The folks at the Pentagon who, unlike Trump, appear to have read the Posse Comitatus Act of 1878, said they would not follow the president's directive. The soldiers being deployed will provide logistical support, crowd control, and other such services, but will not use force. Trump quickly backed down, not only on his plans for the use of soldiers, but also his threat that rock throwers would be shot at. However, this incident certainly does not increase the chances that Secretary of Defense Jim Mattis will still be on the job when the calendar turns to 2019.

Over at the EPA, meanwhile, folks are apparently much more willing to take orders. And so, this week, they seem to have shut down the Agency's climate change website for good (well, until the next Democratic president takes office). Previously, the site was taken down for "updates," but nobody really believed that it would be back. Now, the link redirects to an EPA-hosted search page that makes no mention of climate change whatsoever. There is no truth to the rumor that they have also added a picture of an ostrich with its head in the sand, however. And incidentally, it's worth taking a look at the URL to the Newsweek piece linked above. Freudian slip?

In the end, Donald Trump and the EPA can stick their fingers in their ears and pretend all they want, but this issue is not going away. In fact, just this week the Supreme Court rejected a request by the administration to quash a lawsuit filed by a group of young people who believe that they are being injured by the government's failures to fight climate change. "These young Plaintiffs, mere children and youth, are already suffering irreparable harm which worsens as each day passes with more carbon dioxide accumulating in the atmosphere and oceans," reads the complaint. Whether the plaintiffs fail or not, the heat on the administration and on the GOP is just going to get worse and worse as the situation gets more dire. (Z)

On Friday, Donald Trump—who is in full "get out the base" mode—tweeted this for the benefit of his Iran-hating followers:


Very...uh, interesting use of the "Game of Thrones" font. And while most presidents, of course, would not be so ham-fisted as to announce an obvious vote-grabbing policy decision literally the day before an election, Trump is not most presidents.

In any event, Trump is lucky there is no fine print on Twitter, because the sanctions aren't exactly a song of fire and ice. In fact, they are closer to a song of limp noodles and rice. Eight countries will be allowed to keep purchasing Iranian oil. That includes Japan, India, and South Korea, who are the Iranians' three biggest customers. Iranian banks will also be allowed to remain connected to the global SWIFT financial messaging system, which effectively means they remain dialed into the world's stock and commodities markets.

These developments suggest two things. The first is that the hawks in the Trump administration, particularly John Bolton, are not getting their way. It would not be a surprise if Bolton joins the post-midterm exodus. The second is that, when push comes to shove, Trump doesn't have the power to bend the other industrialized democracies to his will. It is clear that Japan, South Korea, et al. were going to do as they pleased; granting them "waivers" just looks better than admitting "they ignored us." Meanwhile, the Iranian government has historically responded to sanctions by rallying around them, hunkering down, and whipping up anti-American sentiment. So, Trump may have secured the worst of both worlds for himself: Sanctions weak enough to have a limited impact, and yet strong enough to provide the Rouhani regime with a useful propaganda tool. That is certainly not going to help the Donald gain control of the Seven Kingdoms of Westeros, much less the Iron Throne. (Z)

Maybe God Is a Republican

We are now close enough to Election Day that it is possible to project the weather with a fair bit of precision. Here is what it will look like: 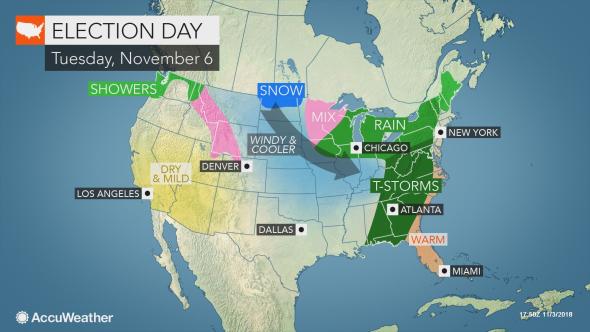 As you can see, some of the swingiest states will also be the hardest-hit. That includes Georgia, Missouri, Indiana, Tennessee, Michigan, Wisconsin, and Florida.

As a general rule, bad weather depresses turnout, and lower turnout favors the GOP. Whether that holds this year, when voter enthusiasm—particularly on the left—appears to be sky-high is one of the many known unknowns on Tuesday. Particularly interesting is the pattern in Florida, where the strongly conservative panhandle is set for a beating, but the left-leaning rest of the state is not. A pattern like that might have saved Al Gore in 2000, and could certainly work to the benefit of Sen. Bill Nelson (D-FL) and Democratic gubernatorial candidate Andrew Gillum. (Z)

And So it Begins

If the Democrats do take the House and/or the Senate, it's going to lay the groundwork for two years of gridlock. The Democrats have no interest in advancing Donald Trump's agenda, and Trump has no interest in advancing theirs. And so, the business of Washington for the next two years is likely going to be posturing in advance of the 2020 election, and trying to show voters what will be done if each party is given control of the federal government.

Donald Trump and the GOP probably have the weaker end of that deal, if only because they've already had control of the government for two years, and so people already know what they will do with it. It is the Democrats who will have an opportunity to make the biggest and loudest statements. Election Day isn't even here yet, and already the blue team has fired the first salvo, a proposal to get rid of the tax cut for the rich and to use the money to fund raises for teachers instead. At a press conference to announce the proposal, Senate Minority Leader Chuck Schumer (D-NY) declared:

Teachers of America, we Democrats hear you loud and clear. Put simply, instead of giving a tax cut to the richest of Americans, we should give a pay raise to teachers in this country who our students depend on to succeed.

Schumer & Co. undoubtedly got this one in early in hopes that it might give the blue team a little boost ahead of the midterms. But this is going to be commonplace if the country exits the midterms with a divided government, setting up 2020 Democratic pitches like, "The party of teachers, not the 1%" and GOP responses like "Money for the wall, or money for corrupt liberal teachers' unions?" It's not going to be pretty. (Z)

Here's the last roundup of Senate news before the midterms. The vast majority of news stories are of the following four types:

Here are the stories that make up most of the remaining 10%:

That's our story and we're sticking to it. (Z)

As voters get their first chance, nationwide, to express their views on the choices made in 2016, why not go back to that election for our Democratic candidate of the week? New polls put Rick Scott slightly ahead in Florida and Tennessee tied. But the weather could affect both of those elections (see above), with God helping the Republicans in Tennessee and the Democrats in Florida. Bipartisanship on high?

The closeness (and thus unpredictability) of the Senate is indicated by the map today where we have three exact ties (Arizona, Missouri, and Florida). All of them could go either way, and so could Indiana and Nevada. It will probably be a real nailbiter Tuesday evening. (V)

If you have a question about politics, civics, history, etc. you would like us to answer, click here for submission instructions and previous Q & A's