•  Trump's Attitude Toward Russia Will Be Tested Today
•  Two Republican Senators Want Their Party to Return Steve Wynn's Donations
•  Trump May Rejoin Paris Accord
•  Everyone Wins with Senate's Abortion Vote Today
•  Grammys Get Political
•  Trump Administration May Nationalize 5G Network
•  Voters Want SOTU Speech to Be about Health Care, Jobs, and Terrorism
•  SOTU? So What?


Trump's Attitude Toward Russia Will Be Tested Today

Congress passed a law last year requiring the administration to impose sanctions on Russia for meddling in the 2016 election. The law also requires sanctioning oligarchs close to Russian President Vladimir Putin. The deadline for their imposition is today. The big question is whether will Trump impose them, and risk ruining his relationship with Putin, or delay and/or ignore the law, and risk ruining his relationship with Congress. Neither choice is especially appealing to the President.

Trump has repeatedly denied that Russia meddled in the election, despite the CIA and NSA unambiguously saying that it did indeed meddle. This suggests that he might delay imposing sanctions and take his chances with Congress. There is also an escape clause. The law Trump grudgingly signed in August allows him to waive the sanctions if Russia has reduced its meddling. Trump could just claim that, without proof, and hope Republicans in Congress will accept it. Given how few of them have been willing to stand up to him, the strategy might work. On the other hand, the senator who would be expected to demand the proof is Foreign Relations Committee Chairman Bob Corker (R-TN), who, from time to time, does mildly criticize Trump. Since he is not running for reelection, he has little to lose. That said, don't bet on him speaking up. (V)

When it came out that Democratic contributor Harvey Weinstein sexually harassed many women, many Republicans gleefully demanded that Democrats return his campaign contributions. They did so. Now the shoe is on the other foot, with Republican Steve Wynn accused of similar misconduct. Yesterday, two Republican senators came out and took baby steps in the same general direction, but far less forcefully than about Weinstein. Sen. Lindsey Graham (R-SC) said that Republicans should return Wynn's money "if the allegations have merit." In other words, he is apparently not yet convinced Wynn did anything wrong. Sen. Susan Collins (R-ME) took a different approach. She basically conceded that Wynn may have behaved badly, but only requested that Republicans give back any money that hadn't been spent already. In many cases, that would be zero, or close to it. (V)

Trump May Rejoin Paris Accord

Donald Trump sat for an interview with the British channel ITV, which was aired on Sunday. The Brits are very interested in the Paris Accord, and so they asked what the President's plans are on that front. He explained that he's willing to rejoin the pact if the deal is better. "If somebody said, go back into the Paris accord, it would have to be a completely different deal because we had a horrible deal," Trump declared. "Would I go back in? Yeah, I'd go back in...I would love to."

This is, of course, another one of those corners that Trump has painted himself into. He's denied that global warming is even a real thing, a sentiment that he repeated in Sunday's interview, when he falsely claimed that global temperatures are cooling and that the polar ice caps are not shrinking. His base loves these denials, and they love that he spat upon a treaty negotiated by the hated Barack Obama. On the other hand, there are a lot of stakeholders who believe that global warming is a real thing and is a threat to the United States. The U.S. military feels that way, as do many moderate Republicans, and virtually all independent voters.

What the President is presumably signalling, then, is that the other nations who are taking a lead on this agreement—France, China, India, the UK, Japan, etc.—need to come to him with slightly more generous terms. Then he can sign back on, declare a "win," and send a bunch of tweets out about how he is a great dealmaker. We shall see if Emmanuel Macron has better luck than Chuck Schumer did. (Z)

The Senate is scheduled to vote on a cloture motion on Lindsey Graham's bill to ban abortions after 20 weeks. No one expects there to be 60 votes to invoke cloture, which means the bill will die. But many senators will win anyway. Graham, for starters, is a little too independent for many South Carolina Republicans, so he will get a few brownie points with conservatives by "trying" to ban some abortions. For at least bringing the bill up for a vote, Majority Leader Mitch McConnell (R-KY) will get credit with conservatives who don't trust him. The NRSC will be happy because moderate Democrats will be in a bind on how to vote, and if they oppose the bill, this will be grist for the NRSC's fundraising mill.

Most Democrats also stand to gain by having new proof that Republicans want to enact an ideological agenda. They can tell their supporters the only way to stop the Republicans is to give Democrats control of Congress. Everyone knows all of this, so the whole thing is just political theater in which each side is trying to rev up its base rather than actually pass a bill. (V)

Sunday night, the Grammy Awards were held. Given the nature of the music business, and the large number of awards given out, the ceremony is generally the most diverse of the "big four." Such was the case this year, and given that fact, it is none too surprising that the night turned political, with a strong anti-Trump current. In fact, it was something of a "greatest hits" of current hot-button issues: #MeToo, Black Lives Matter, dreamers, immigration, and so forth.

There was also one moment, above all others, that had everyone talking. Host James Corden arranged a pre-recorded bit about his efforts in trying to win next year's Best Spoken Word Album, which generally goes to a non-musician for reading an audio book. Sunday's winner was Carrie Fisher, and other recent winners include Jimmy Carter (twice), Joan Rivers, Betty White, Michael J. Fox, Barack Obama (twice), Bill Clinton, and Al Franken. That list certainly gives a pretty good sense of the politics of the Academy. For Sunday's bit, the book that Corden used was Michael Wolff's treatise on the Trump administration, and the notion was that he was auditioning possible readers. John Legend, Cher, Snoop Dogg, Cardi B, and DJ Khaled all failed their auditions. Then came the "winner," who began with the book hiding her face, and then was revealed to be...Hillary Clinton:

The passage that she read—and apparently Corden and his writing staff put great thought into the choice—was the one about Trump's love of McDonald's, including the bit about how he knows the food there won't be poisoned.

The President, who spent much of the day Sunday in a Twitter feud with rapper Jay-Z, reportedly retires between 7:00 p.m. and 9:30 p.m. these days, and so was probably not awake to see the broadcast live. UN ambassador Nikki Haley was up, however, and has already registered her displeasure:

I have always loved the Grammys but to have artists read the Fire and Fury book killed it. Don’t ruin great music with trash. Some of us love music without the politics thrown in it.


There is a certain irony in her declaring that it is inappropriate for a person in one field to presume to comment on the other. It's also interesting that she seems to think that music is inherently apolitical—perhaps she has never heard of minor acts like Bob Dylan, Ray Charles, Nirvana, the Beatles, U2, Eminem, N.W.A., Public Enemy, The Doors, Queen, Michael Jackson, or every blues artist. In any event, Trump's Twitter blast will undoubtedly come sometime Monday morning. Chances of a "Crooked Hillary" reference are high. (Z)

Speaking of irony, the party of small government is apparently considering nationalizing the nation's 5G network, according to documents obtained by Axios. Someone might want to take the members of the Trump administration aside and explain to them what "socialism" means, since they seem to be bigger fans than their campaign rhetoric would suggest.

The network, however it is built, will eventually replace the United States' current telecommunications network, which is a blend of 4G and 3G, and handles cellular traffic and other tasks. The official reason for considering nationalization is to make the network secure against Chinese encroachment. If the plan moves forward, however, there will be a lot of concerns. Among the big ones:

If this does happen, and depending on how it unfolds, it could be a political boon to Trump as he launches his re-election campaign. One can imagine a scenario, for example, where some/many Americans are granted free cellular access, in much the same way that most of the nation's freeways carry no surcharge. However, given all the concerns listed above, along with the fact that Team Trump has not proven particularly adept at getting their ideas off the drawing board, you probably should not cancel your contract with Verizon just yet. (Z)

Voters Want SOTU Speech to Be about Health Care, Jobs, and Terrorism

Tomorrow, Donald Trump will deliver his first state of the union (SOTU) speech. Politico had Morning Consult run a poll to find out what people wanted Trump to talk about. The top three topics were improving the health care system (59%), creating jobs (58%), and fighting terrorism (54%). Stopping illegal immigration was important to four out of 10 people. The bottom topic on the list was fighting global poverty (27%).

Morning Consult also ran a bunch of adjectives by the respondents to see how many felt that each one applied to Trump. Here are the results: 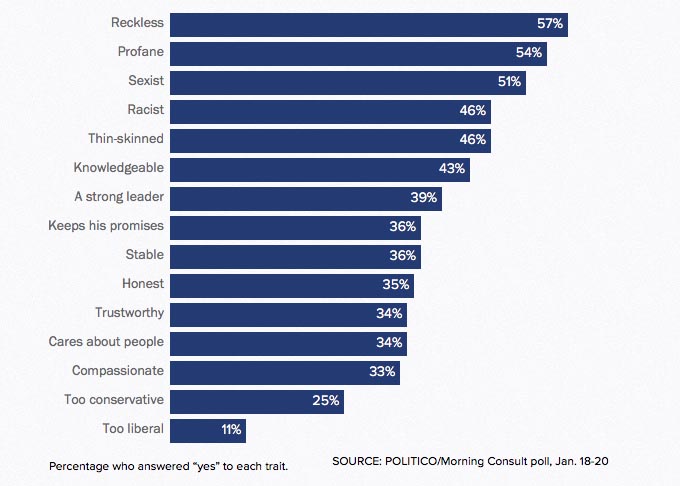 As Donald Trump prepares for Tuesday's State of the Union (SOTU) address, early reports suggest that his plan is to emphasize unity, and to try and strike a bipartisan note after one of the most divisive years in American history. Given that Stephen Miller is writing the address, and that he dislikes something like 80% of the electorate, we'll believe it when we see it. Nonetheless, "kumbaya" is supposedly the plan.

Whatever the message is, the SOTU has historically been an opportunity to communicate with the American people, to celebrate the past year's accomplishments, to set the agenda for the coming year, and perhaps to inspire the electorate. For these reasons, there is a very good chance that this will be the most inconsequential SOTU in decades, or even generations:

Trump himself appears to be tacitly acknowledging that Tuesday's speech is somewhat low-importance; unlike other presidents he has no events scheduled later in the week to highlight and reiterate the themes of the SOTU. Indeed, the big story of the night might be what the opposition does: how many members of Congress boycott, how many wear all black, if someone will shout out "you lie!," how well Rep. Joe Kennedy (D-MA) does on his response, and so forth. The First Lady might make a few headlines too, if she is obviously cranky, or if she doesn't show up. (Z)