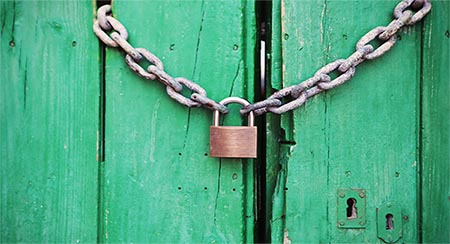 Congress never gets a budget done on time these days. In fact, the legislature is on a 20-year streak of passing continuing resolutions to give themselves more time. Eventually they do tend to figure it out, but not this year. After the House of Representatives passed (yet another) continuing resolution that the Senate refused to approve, the government shut down at 12:01 a.m. EST this morning. It's been 5 years since that last happened.

Certainly, a fair bit of effort went into trying to avoid this outcome. Senate Minority Leader Chuck Schumer (D-NY) spent hours at the White House trying to hammer out a compromise with Donald Trump, and then spent more hours back in the Senate trying to do with same with Majority Leader Mitch McConnell (R-KY). It was all for naught, as the Senate never came particularly close to getting something done before adjourning late in the evening. When the senators voted on the House's bill, having failed to come up with an alternative of their own, the GOP was able to peel off five red-state Democrats: Joe Donnelly (IN), Heidi Heitkamp (ND), Doug Jones (AL), Joe Manchin (WV), and Claire McCaskill (MO). That's not enough, even if they hadn't lost the votes of Jeff Flake (R-AZ), Lindsey Graham (R-SC), Mike Lee (R-UT), Rand Paul (R-KY), and...Mitch McConnell. The Majority Leader's "nay" vote was reportedly for procedural reasons, since a senator who votes in that way is allowed to ask that a bill be brought up for consideration again. In other words, he may try to jam this through a second time. If so, he needs to flip all the GOP naysayers, plus another four Democrats.

At the moment, the shutdown is primarily symbolic, since most government offices are closed for the weekend, and the ones that aren't generally don't shut down even when there's no budget. The primary consequence thus far, although it's admittedly a pretty dire one, is that Trump had to cancel his weekend golf trip to Mar-a-Lago. Never let it be said that the folks in Washington don't feel the consequences of their shenanigans.

The members of Congress also canceled their travel plans, so they could keep working on the problem through the weekend. White House Budget Director Mick "The Knife" Mulvaney, among others, is confident that everything will be straightened out in time for the open on business on Monday, telling CNN that, "I think you're going to see a deal." He may be right, but the members still face the same basic problem: They can't get on the same page. In particular, the House Freedom Caucus and Senate Democrats have diametrically opposed views on DACA, and both have numbers enough to make it difficult (the HFC) or nearly impossible (Senate Democrats) for leadership to ignore them. Something's going to have to give, and we've got about 36 hours left for that to happen after three months of it not happening. Failing that, a lot of people are going to have unpaid holidays on Monday.

Clearly recognizing the distinct possibility that a deal does not get done, both sides are spinning furiously in order to pin the blame on the other side. The Democrats have the easier case to make, since the GOP controls the levers of power. Sen. Pat Leahy (D-VT), for example, declared that, "It's hard for anybody with a straight face to say, 'Republicans control the presidency, the House and the Senate. I hope Democrats don't close us down.'" Further, Schumer and House Minority Leader Nancy Pelosi (D-CA) are claiming that they had a deal with the President, and that he walked away from it after talking to some of his conservative advisors. The Democrats have also taken to calling it the "Trump Shutdown." This is a response to the White House, which has been calling it the "Schumer Shutdown" for the last 48 hours. Fox News pundit Sean Hannity, who can always be counted on to tote the red team's water, argued that the Democrats are willing to put undocumented immigrants ahead of American citizens. Expect to hear that talking point a whole lot more if the government is still closed on Monday.

Who is going to win the battle of spin? Well, historically, the party in control of Congress during a shutdown takes the blame. The data we have at hand suggests that the pattern will hold this time. A WaPo/ABC News poll says that 48% of voters are pointing the finger at Trump and the GOP, while 28% think it's the Democrats' fault. Quinnipiac has it at 53%/34%, while CNN's numbers are 47%/31%. Significantly, the polls also reveal that independent voters blame the Republicans by a 2-to-1 margin, while Democratic voters think that holding the line on DACA is well worth risking a government shutdown. The icing on the cake, such as it is, comes from Twitter, where the top-trending tag worldwide on Friday night was #TrumpShutdown. Undoubtedly, party leaders on both sides are aware of these numbers, which means that a deal to protect the dreamers is very likely before the weekend is out. (Z)

Yesterday, the Supreme Court agreed to review the legality of Donald Trump's most recent ban on people from six majority-Muslim countries entering the U.S. The U.S. Court of Appeals for the Ninth Circuit ruled that the ban violated U.S. law. The administration appealed to the high Court, which will take up the case in April and will rule by June.

The ban has been extremely controversial since Trump has himself said that it was intended to keep Muslims out of the country. The Justice Dept. has defended the ban by saying the president has broad authority to determine whom to let into the country and whom to bar. The Ninth Circuit Court disagreed, however, and ruled that while the president can ban specific people from entering the country, he doesn't have the authority to ban entire religions or nationalities. In effect, the Supreme Court will have to decide precisely how much authority the president has in this area.

The Court has a large number of hot-button cases on its agenda this year, including a case about a baker who doesn't want to bake cakes for gay weddings, partisan gerrymandering, an Internet sales tax, and sports gambling. (V)

Only a Third of the Country Approves of Trump

With today marking the one year anniversary of Donald Trump's inauguration, it's a good time to take stock of how well he is doing. The Los Angeles Times published a poll yesterday that gives a good impression. To start with, 32% of Americans approve of Trump, 55% disapprove, and 12% are neutral. This is the worst any president has scored at the one-year point since polling of this sort began after WWII. Worse yet for him, 42% said they strongly disapprove and only 15% strongly approve. Trump is also dragging down the Republican party, with 51% preferring a Democrat for the House and 40% preferring a Republican.

Vance Won't Run for the Senate

Mitch McConnell has been trying hard to sign up Hillbilly Elegy author J.D. Vance to run for the Senate against Sen. Sherrod Brown (D-OH) after state treasurer Josh Mandel dropped out. Yesterday, Vance announced that he wouldn't make the run due to family and work obligations. Unless someone else of note gets in the race quickly, it looks like Donald Trump's preferred candidate, Rep. Jim Renacci (R-OH), will get the nomination without too much of a problem.

It is not surprising that Trump backs Renacci, as Renacci has supported Trump though thick and thin. Most recently, he defended Trump for calling Haiti, El Salvador, and countries in Africa "shithole countries." Most other Republicans were aghast when Trump said this. Gov. John Kasich (R-OH) said: "It's a terrible comment" and Paul Ryan said the remarks were "very unfortunate."

Renacci was originally running for governor, but when Mandel dropped out (due to his wife's health problems), Renacci decided to run for the Senate instead. (V)

The federal government put Sen. Bob Menendez (D-NJ) on trial for corruption last year but the trial resulted in a hung jury. Now the feds want to try again. What a difference a year makes, though. If Menendez had been found guilty last year and forced out of the Senate, then-governor Chris Christie would have appointed a Republican to replace him, changing the delicate partisan balance of the Senate. As a consequence, Democrats were quietly rooting for him to be acquitted, so as not to lose the seat. Now that Gov. Phil Murphy (D-NJ) has been sworn in, everything changes. If Menendez is found guilty and quits now, the governor will name a Democrat to the seat, thus keeping the partisan balance the same. Since Menendez is up for reelection in 2018, probably most Senate Democrats are quietly hoping that he is found guilty and quits so they will get a candidate with a lot less baggage in November. (V)

For the past year, Democrats have been praying (to the extent that Democrats pray) that Supreme Court Justice Ruth Ginsburg's health holds out for at least three more years. The health of the other justices wasn't really on the radar until yesterday, when Sonia Sotomayor was treated by emergency medical services. She has had type I diabetes since she was a child and the medical scare yesterday was due to low blood sugar. She recovered after being treated and was able to work afterwards.

She controls the disease with a combination of insulin injections, glucose tablets, and regular checks of her blood sugar. When her new law clerks arrive each fall, she explains to them how to detect that she has low blood sugar and how to treat it. (V)

Reaction to the Trump's administration's decision to move the U.S. embassy in Israel from Tel Aviv to Jerusalem was overwhelmingly negative. Since this is the kind of thing that can take a long time to work out, Team Trump could easily have dragged its feet until the whole thing was forgotten or was some other president's problem. That's not the plan, however, as a decision has been made to move into an existing building owned by the U.S. government. That will allow the relocation to take place sometime in 2019.

Actually, the move would have taken place sometime this year if Donald Trump had his way. It was Secretary of State Rex Tillerson who insisted on such trivialities as waiting until a proper security system is installed. It would seem that someone, at least, has heard of Benghazi. And all of this news adds to the general impression that the President's primary concern is the (short-term) PR victory he's trying to score with the base. (Z)

It could be a long time before we fully understand the full extent of Russian meddling in the election of 2016 (if we ever do). The latest bearer of bad news is Twitter, which announced that it has identified 3,814 accounts that are likely under the control of the Kremlin-linked troll farm called the Internet Research Agency (IRA). The press release does not make clear if @realdonaldtrump is one of the 3,814.

The activity of these troll accounts was quite extensive. They produced a staggering 176,000 tweets in the 10 weeks preceding the election, which were then retweeted endlessly by another 50,258 automated accounts tied to the Russian government. At least 700,000 users interacted with the troll tweets; those folks will be notified by Twitter this week. Of course, the social media platform has no way of knowing how many millions of additional users read those tweets without any interaction. And, apparently, no particular ability to police its users. (Z)