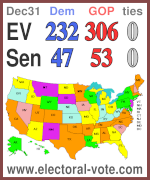 The Democrats held a very long day of impeachment testimony, featuring four different witnesses. Intelligence Committee Chair Adam Schiff (D-CA) is a cagey fellow, and given that the main purpose here is to publicize evidence of Donald Trump's bad behavior, it's a little strange that he overloaded the docket so significantly. One wonders if he was trying to bury the witness that was so far the most helpful for Trump.

Here are the four folks who spoke on Tuesday, in order, along with the key things that happened during their appearances:

If we really boil it down to the essence, the four witnesses all effectively confirmed the Democrats version of events, with the first duo implicating Trump in the scheme, and the latter two trying not to do so. This was not a great day for the President, but it was good enough that he claimed victory on Twitter:


Fox News agreed, though one suspects that the President and his friends in the media would have adopted a celebratory tone no matter what was said.

Up today, of course, is Sondland. The folks who testified on Tuesday all, on some level, corroborated what we already knew about Sondland's role in the whole affair. So, if the Ambassador plans to spin a tale similar to the one he told behind closed doors, he's going to have a hard time doing it without perjuring himself. Maybe he'll do it anyhow, in anticipation of spending some quality times playing gin with Roger Stone. Or, maybe he will chose a different path. We'll learn what he's decided starting at 9:00 a.m. ET today. (Z)

The Trump administration slipped this in pretty late in the day on Monday. Anyhow, Team Trump has decided that its new, official position is that "The establishment of Israeli civilian settlements in the West Bank is not, per se, inconsistent with international law." That now puts the White House in opposition to the position taken by the Obama administration and by all of the presidents back to Jimmy Carter, as well as to the position of the United Nations and the European Union.

The only real surprise here is that it took as long as it did for the administration to make this move, as it checks all of the President's favorite boxes. It pokes his biggest nemeses—Barack Obama, the U.N., the E.U.—squarely in the eye. If Hillary Clinton and Jeff Bezos could be somehow be added to the list, it would be a clean sweep. On top of that, it will please the base. And it will give Trump buddy Benjamin Netanyahu a shot in the arm. It may be too late for the Israeli PM, as Benny Gantz tries to form a new government, but it also may not be.

This decision does makes the possibility of a peace settlement, which was already a longshot, more remote. That would appear to be a minor concern for the President, however. After all, this is hardly the first time that Trump has pursued a foreign policy dictated primarily by his own personal needs. Ukraine leaps to mind. (Z)

the current White House Press Secretary, Stephanie Grisham—who, by the way, has yet to hold a press conference in her nearly five months on the job—appeared on the radio show hosted by conservative talker John Fredericks on Tuesday. And she decided she needed to stir the pot a little, so she said this:

When we came into the White House, I'll tell you something, every office was filled with Obama books, and we had notes left behind that said "You will fail," "You aren't going to make it." In the press office, there was a big note taped to a door that said that "You will fail."

Grisham and Fredericks agreed that this was "shocking" and "pathetic."

This does not come remotely close to passing the smell test, for a whole bunch of reasons. Among them:

Given the baldfaced and malicious nature of the lie, there is now much pressure on Grisham to resign. Don't hold your breath waiting for that to happen. (Z)

New Hampshire Poll Has Buttigieg in the Lead

St. Anselm has released its latest poll of New Hampshire, and the results are...surprising. They now have Mayor Pete Buttigieg (D-South Bend) in first place, and it's not even close. According to their results, he's up 10 points on Joe Biden and Sen. Elizabeth Warren (D-MA), and he's up 16 on Sen. Bernie Sanders (I-VT).

Let's give a little context by listing all four recent polls of New Hampshire (St. Anselm, CBS News/YouGov, Quinnipiac, and CNN/UNH), with any candidates who got above 1% in at least one of them:


On one hand, this result is clearly something of an outlier. All of the polls here were conducted in the last few weeks, and it's implausible that Buttigieg jumped 10 points overnight. It's equally implausible that Sanders is down to just 9% in the state next to his home state.

At the same time, it's clear that Buttigieg is on the rise in the Granite State. Each of these polls represented an improvement over the last, and the last time St. Anselm polled New Hampshire (in September), he was at 10. Overall, he remains in fourth place among the Democratic candidates, but he's certainly picked exactly the right time to be on the upswing. Just 76 days left until Iowa voters head to the caucuses. (Z)

We're just less than a year away from Election Day, and yet tonight will see the fifth Democratic debate of 12 (!) overall!. This one will be hosted by MSNBC and the Washington Post, and will be moderated by Rachel Maddow, Andrea Mitchell, Ashley Parker, and Kristen Welker. The site is Tyler Perry Studios in Atlanta, GA; a clear attempt to steer the debate toward issues of interest to black voters. Everyone from debate four will be back for another tilt with the exception of no-longer-a-candidate Beto O'Rourke and didn't-make-the-cut Julán Castro.

Beyond the usual Democratic debate issues (Medicare for All, climate change, immigration), it will be interesting to see how much time is spent (if any) on the issue of the moment, namely impeachment. The candidates have, in general, shied away from addressing that subject, and Maddow, et al. will be thinking long and hard whether to allow that to continue. Meanwhile, Pete Buttigieg's rise in the polls is going to put a big target on his back, especially since Biden doesn't like to attack his fellow senators, and Elizabeth Warren and Bernie Sanders don't like to attack one another. Rep. Tulsi Gabbard (D-HI) is a wildcard; it's not clear what her game is right now, but it seems to involve the phrase "scorched earth."

Undoubtedly the debate will get a fair bit of coverage on Thursday, but beyond that, it's unlikely to have much of an impact on the race (unless someone makes a major error). First, because the debates in general haven't moved the needle very much. Second, because the primary effect of any debate is to introduce the candidates to the voters. At this point, the ten folks on stage have been pretty well introduced. Third, because we've reached a clear saturation point, and viewers' interest is waning. The first round of debates, back in July, attracted 24.3 million viewers (first night) and 27.1 million (second night). By contrast, the fourth debate, held last month, got just 8.3 million viewers. And finally, there is a very good chance that Gordon Sondland's testimony (see above) will be big news, and will push the debates down the page.

In any event, the fun begins at 9 p.m. ET tonight and, mercifully, will last 2 hours instead of 3. The major cable news outlets will all be covering it, and both MSNBC and the Washington Post will offer free online streams on their respective home pages. (Z)

There are a number of well-known voter prediction models based on food preferences. For example, the one based on Starbucks customers versus McDonalds customers. Or the one based on Cracker Barrel versus Whole Foods locations. Last week, Sen. John Kennedy (R-LA) offered up a new formulation, declaring that he, Donald Trump, and now-defeated gubernatorial candidate Eddie Rispone represent the real people, and not the "cosmopolitan, goat's-milk-latte-drinking, avocado-toast-eating insider elites."

Turns out, that was a more prescient analysis than the Senator realized. Avocado toast was hip among urbanites about five years ago, but you would be hard-pressed to find a Michelin-starred restaurant that serves the dish now. On the other hand, as tends to be the case with food trends, avocado toast has radiated out to the suburbs, where it's on the menu all over the place. And indeed, a major part of the reason that Rispone went down to defeat is that the Louisiana suburbs moved decisively toward the Democrats compared to 2016. For example, Jefferson Parish contains much of the New Orleans suburbs. 40% of the votes there went for Hillary Clinton in 2016, but more than 60% went for Gov. John Bel Edwards (D-LA) this past weekend.

This, of course, continues a trend we've seen in other states this year, particularly Kentucky and Pennsylvania. If the Democrats continue to do so well among avocado toast eaters, 2020 will be a rough year for the GOP. (Z)

Jim Jordan May Get a Never Trump Challenger

As we noted yesterday, Rep. Elise Stefanik (R-NY) has gotten a lot of Republicans excited about her defenses of Donald Trump during the impeachment hearings, but has also lit a fire under her opponents. It would appear the same is true of Rep. Jim Jordan (R-OH).

Already, there is a lengthy list of Democrats who are vying for the right to face the Representative. And now, Chris Gibbs has announced that he's strongly considering a run as an independent. Gibbs was the chair of the Shelby County Republican Party, and voted for Trump, but then he left the GOP and his chairmanship in response to the President's agricultural policies. If he runs, Gibbs would make that his main issue.

On paper, Jordan should have nothing to worry about. In seven House elections, he's never won by less than 22%, and he usually wins by 30% or more. His district, the comically gerrymandered OH-04, is R+14, and went for Trump by 34 points in 2016. On the other hand, quite a few states and congressional districts that were very Trumpy in 2016 have not been voting that way since. On top of that, if the right-leaning vote splits two ways, that could create an opening for a Democrats. And finally, the great scandal of Jordan's life—that, during his time as an assistant wrestling coach, he looked the other way as his wrestlers were sexually molested—has just flared up again. Jordan has consistently claimed that he knew nothing about the molestation, but just last week a former referee filed a lawsuit in which he claims that he personally warned Jordan and head coach Russ Hellickson. Depending on how that case develops, it could wound the Representative badly, and perhaps even fatally. (Z)


Back to the main page